By the fall of 1962, Chevrolet had built a total of 15 Z06-optioned 1963 Corvettes. And they were about to be distributed to a select group of preapproved racers. Those chosen few were lucky enough to get their race gloves around the wheel of one of these prized, factory bred racers two months before the rest of the prospective buyers would be able to take part in the feeding frenzy.

This article was originally featured on HOT ROD. For more stories like this, check out the HOT ROD Network.

When the Z06 was finally offered up for public consumption, the masses were quick to stake their claim for their own prized racer. If you wanted a race-ready ride with looks to die for, well, this potent 1963 Chevy-bred head-turner was definitely the car for you.

One of those hungry Corvette fans waiting for his turn was Corvette racer Richard Jalbert from Rhode Island. Over the years, Richard had become an experienced racer, handling C1 Corvettes on tracks across the Eastern Seaboard. Of course, with this style of racing, accidents were bound to happen, and, well, good ol’ Rich had his share of them. But on the flip-side, he had a good track record, winning several events during his racing career.

When news of the new Z06 option package spread around the Corvette community, Richard jumped into the fray and lined up with the public to get his own. He ordered his personal Z06 in the fall of 1962. Knowing he would be racing this nifty new Corvette on road courses across America, he added in the N03 “Big Tank” option to the sales sheet. 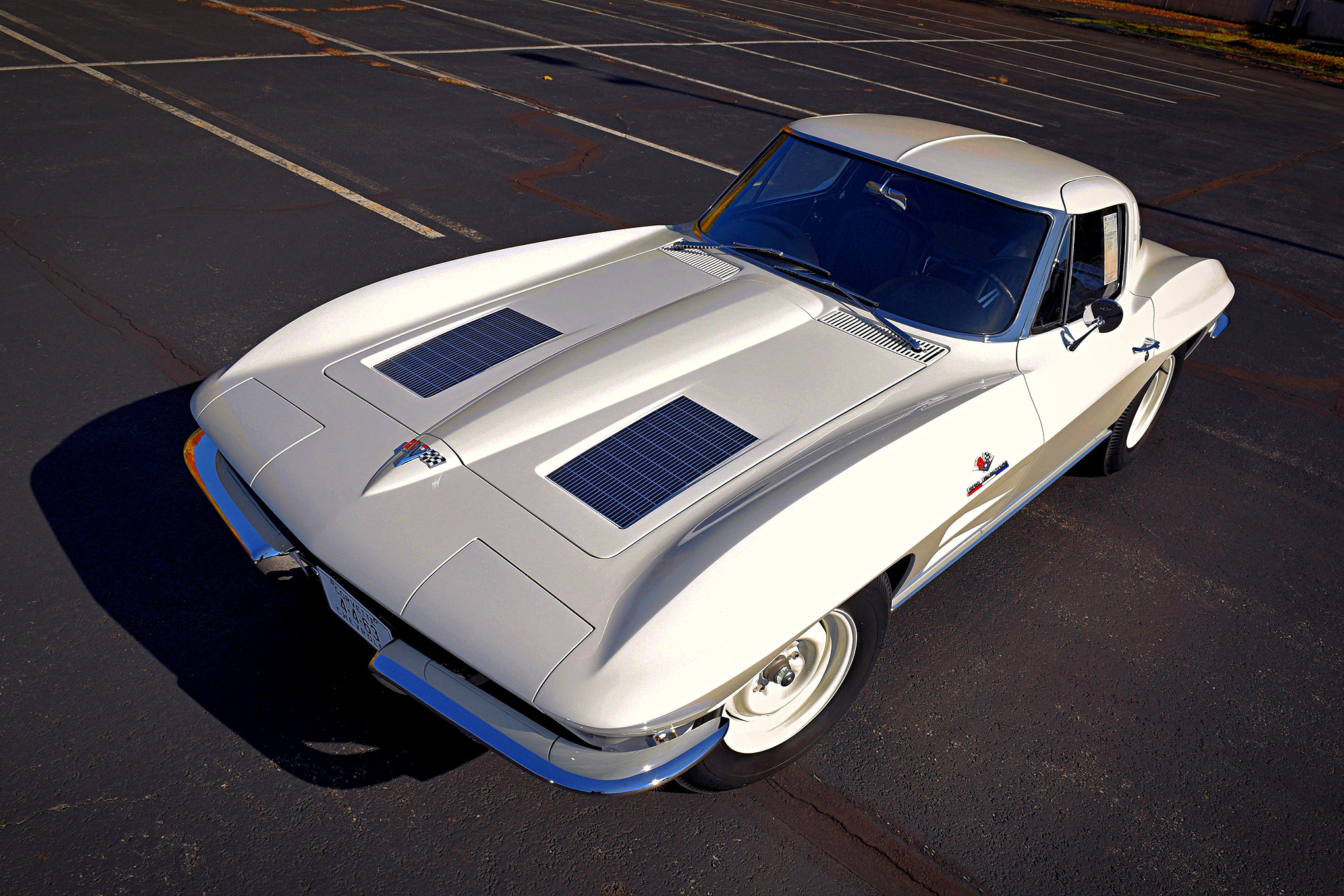 Richard’s Z06 Corvette was built on April 29, 1963, and was picked up a little over a week later on May 9. Excitement was in the air as he went to acquire his new prize from the dealership. Unfortunately, there’s a slight hitch to this story. You see, Richard never told his wife about his new purchase. And just to be clear, this was no “base” Corvette, as the Z06 and the N03 big tank options added nearly 50 percent to the selling price.

When she got a whiff of the new car smell of his fresh-off-the-assembly-line Z06, an ultimatum was quickly directed at Richard. “It’s me or the car,” she insisted. Well, it turns out that Richard felt his marriage was worth more than the car would ever be. Within two months he had sold the car off to its second owner. He never even got a chance to see what this new Z06 could do.

The Corvette then bounced around over the next two years. The second owner held onto it for just over a year before it changed hands again. This time it was acquired by a man who was also a car dealer. It didn’t last long with him either. A few months later he flipped the Z06 to a family who procured the potent ride on September 1, 1965. The Corvette would be used from time to time by both the purchasing parents and their son Todd.

It was with this family that the car would stay for the next nearly half century. Todd put it through its paces on the local byways and highways, but the built Corvette would never be raced the way it was intended. It lived a good life in a small town in Connecticut, where it was safe and out of harm’s way. Though it was driven, it was done sparingly, as the mileage would never reach the 50k mark.

Andy Cannizzo has been a player in the world of high-end Corvettes for the last 30 years. Once a Model A devotee, he got bit by the Corvette bug in Atlantic City at a Dean Kruse auction. “During the auction, a red split-window Corvette crossed the block. It lit a fire in me to buy one,” says Andy. And he soon did, buying a 1963 coupe that turned out to be a bigger project than expected. He quickly sold the car and decided to educate himself more about these vintage Chevrolets before opening his wallet again.

Once he felt he had the knowledge he needed to feel his way around the Corvette marketplace, he was ready to buy. He stuck only to the ’63s over the years, moving up the ladder of rarity little by little, until in 2007, when he scored one of the rarest of them all: a 1963 Z06 big-tank car. Found in Connecticut, the car was worthy of the selling price, but still needed a full blown restoration. Having set aside an abundance of rare and N.O.S. parts over the years, he used his stash to rebuild the car over a five-year period. It was a restoration that would garner him the highest awards in the Corvette world, winning NCRS Top Flight, Bloomington Gold, AACA, and achieving Best Post-War American Car at Amelia Island Concours d’Elegance. 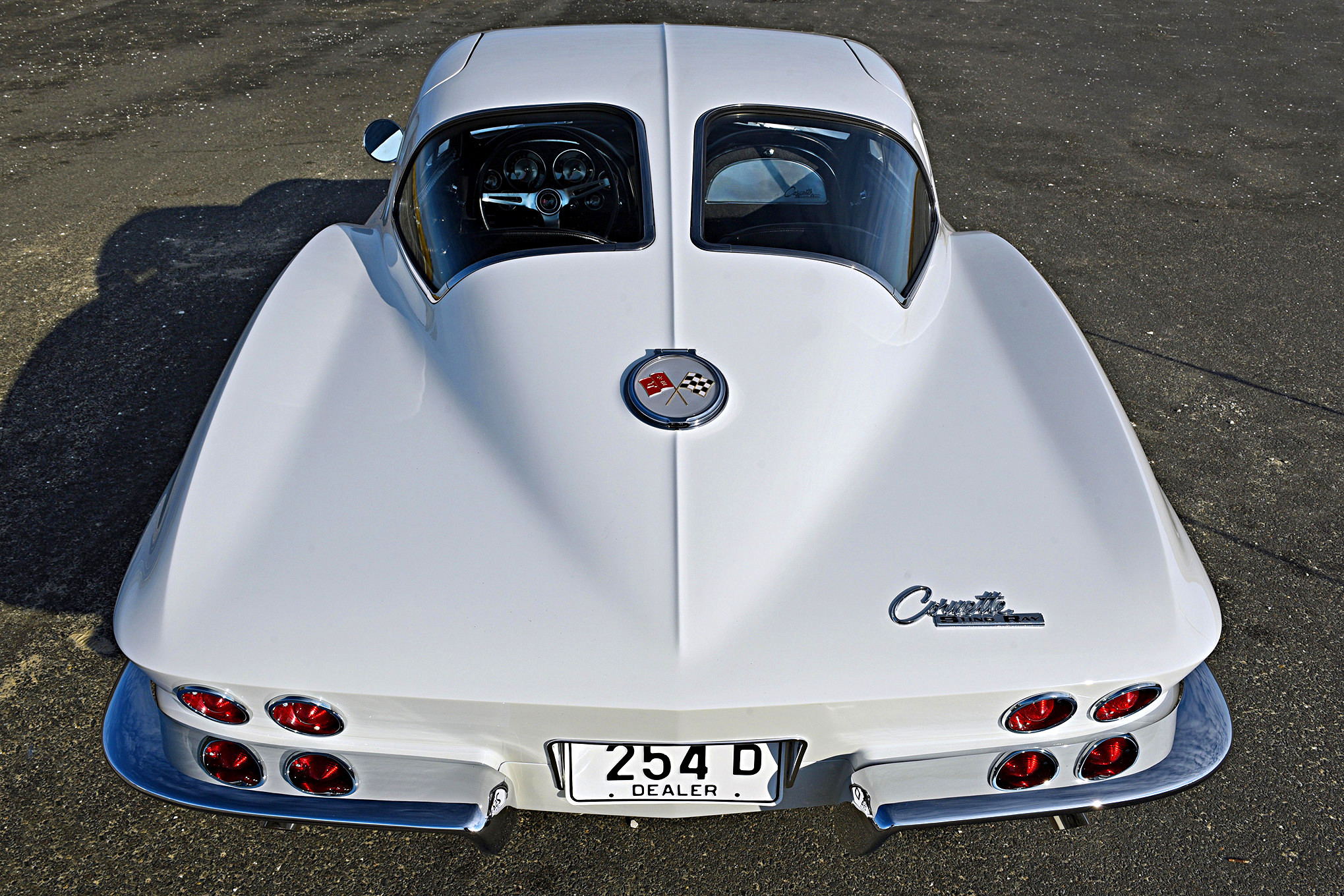 Shortly after finishing the restoration, he was contacted by a friend who knew of another original Z06 tanker car, sitting only a few miles from where Andy located his first one. “I asked him for details and that was when I learned that it was an Ermine White with black gut Z06 tanker, which he had seen three-years prior. I asked him to see if he could help to make the deal,” says Andy. So the friend went ahead and worked on getting him in for an in-person inspection. “When my wife, Nancy, heard it was white, well, she wanted me to buy it for her. She loves white cars,” says Andy.

After six months of waiting, the day came to finally check out the car. “My wife came with me to inspect the car. When we walked into the garage where the Z06 had lived since September 1965, we knew within 60 seconds that it was a real Z06,” says Andy.

He then checked the car over thoroughly, confirming it was a big tank car and a true white/black combination Corvette, one of only three Z06s that exist today with that color combination. “I immediately made an offer on the car, which took three long days to accept,” exclaims Andy. Once they got the go ahead, the couple went back up to Connecticut to bring their prize home.

And what he purchased was a true Z06 tanker; a rare ride that had been used sparingly for 50-odd years. It was a radio delete car, built with blackwalls, and, of course, the big tank option. The body and frame were in excellent shape, as well, and free from any visual damage. Unfortunately, its original block had been replaced early on, but a correct date-coded block was now with the car.

Before he dug in on the restoration, Andy did some research on the Corvette and found out some of the history of this rare ride. One interesting note, this particular Z06’s build date is one day apart from Andy’s other Z06 car, making the statement that these two were extremely close on the assembly line, and possibly consecutive Z06 builds.

Andy’s research immediately led him right to Richard Jalbert. Luckily, Richard still lives in the area and Andy got to talk to him first-hand about his short ownership of the car. From there, Andy followed the short trail of owners of his newly acquired Z06.

Once home, Andy checked out his prize catch, finding out this Corvette was everything he thought it would be. He then had Z06 expert Tony Avedisian come by and document the car, taking pictures of the Corvette to record every pertinent part and every maker’s mark.

After tearing down the car to its bare ’glass, Andy was elated to see that this particular Z06 was never in any kind of accident; rare for such a car, or even just a Corvette of its age. It also had a solid frame, which is a huge plus, particularly because of the fact it’s from the Northeast, where road salts can eat away at metal parts. The car also had the original “X” nozzles in the fuel-injection unit, which were Z06-only parts.

The saving grace for this particular Z06 was that it was never raced, or was not known to ever grace a racetrack. Many Z06s were damaged over the years due to extensive track time. This one more or less lived in the lap of luxury, moving in and out of residential garages in upscale Connecticut homes. 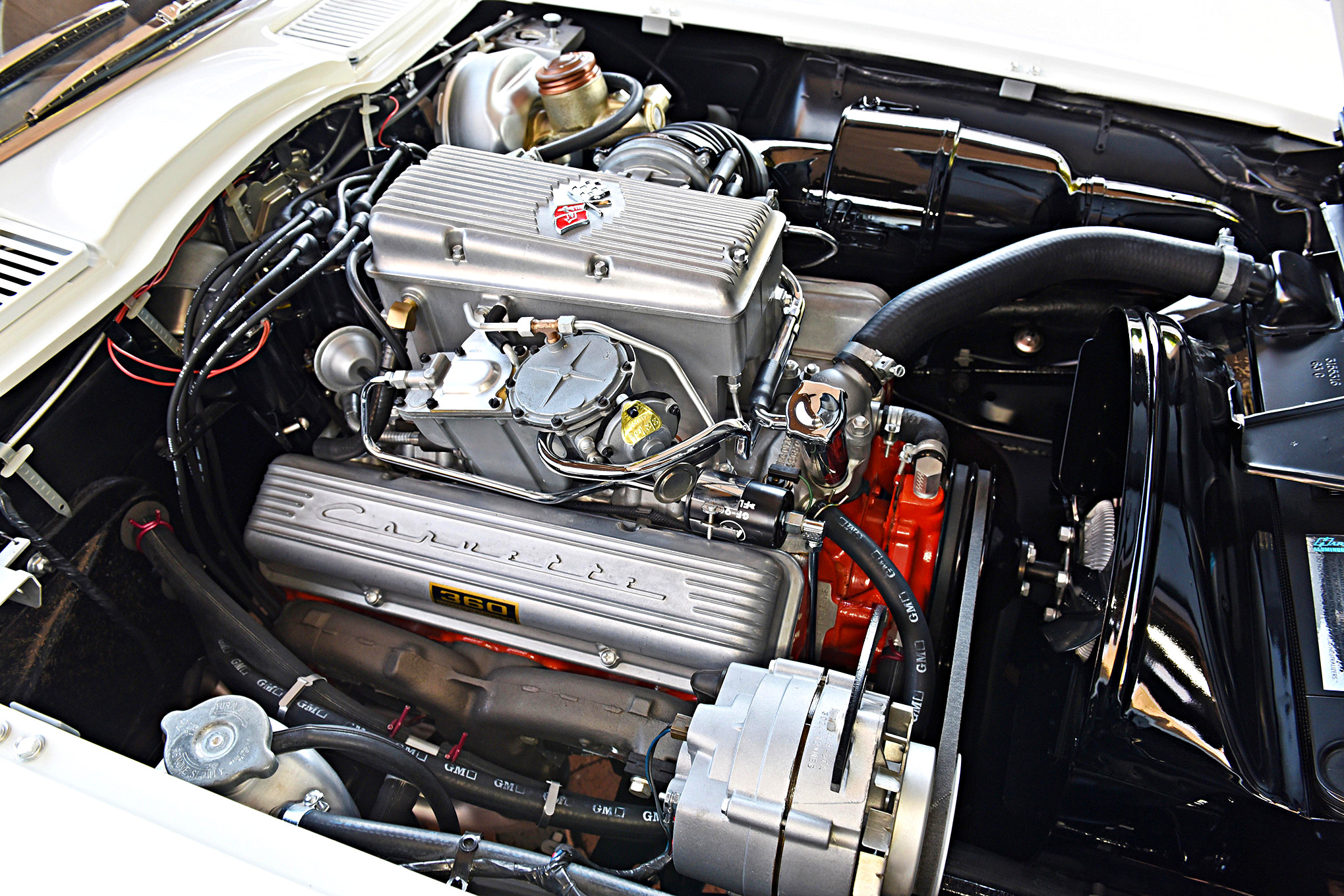 It goes without saying, but this particular Corvette is a rare one for sure. Out of 21,513 Corvettes made in 1963, only 199 got the Z06 treatment. Throw in that only 78 of these had the N03 big tank option, and well you are getting into some scarce territory. The 1963 model year adds to the excitement, being the first year for a coupe, independent rear suspension, and, of course, the famed one-year-only split-window. The final shot over the bow is that this coupe is one of only 50 of these 1963 Z06/N03 split-window coupes known to exist today.

Andy’s approach to restoration is pretty simple; “I restore every part like it’s the only part of the car being judged.” He also photo-documents every part of the process, and tries not to use any reproduction parts. He restores every part that can be, and when he can’t, he opts for N.O.S. items to fill in the pieces of the puzzle. Every nut and bolt on this car was gone over; with Andy doing as much of the work as he possibly could.

But, of course, as with any restoration of this magnitude, Andy didn’t do it alone. Special thanks go out to all the people and companies that helped this build come to fruition. The Cannizzos would like to thank Corvette Paramedics, Steve Gansky, Pat Laudisi, Bob Seminaro, Frank Antonicelli, Glen Spielberg, Starlight Restoration, Andy Bassista, Chris Ryan, Tony Averdesian, and Harry Miller for their help along the way restoring this beautiful Z06.

So now Andy will enjoy the fruits of his labor. The Z06 will make the show rounds this year, as it will be the first time the eager Corvette community will have a chance to see this rare ride in all its glory. And stay tuned, as Andy has another 1963 Z06 tanker under restoration. This Riverside Red/black gut car will make a splash for sure when it hits the pavement, just like this one already has.